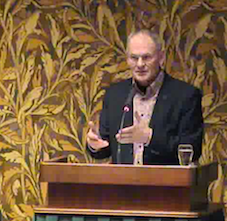 Labour politician / social democrat Adri Duivesteijn has been involved in Dutch spatial planning and urban development, the quality of housing and architecture for over forty years. His primary focus is the role that citizens play in these processes; Duivesteijn has always advocated greater influence of citizens on their own living environment.

From an early age, Duivesteijn fought against the impoverishment of the Schilderswijk in The Hague, the neighbourhood where he grew up. In 1971 he founded ‘De Schilderswijker’, a local newspaper that focused on problems that affected the daily life of over 45,000 people. Besides his work as chief-editor of the paper, he studied at the Academy for Social Work; later he took lessons at the University of Amsterdam. In 1980 – when he was a member of the City Council – he became alderman in The Hague, responsible for housing, physical planning and urban renewal. His philosophy was that urban renewal wasn’t so much a technical task; above all, it was a cultural challenge. With the campaign ‘urban renewal as cultural activity’ that he introduced in 1985, he chose to use the historical identity of neighbourhoods as a starting point for change. Other historic, long-lasting achievements were the realization of the City Hall, designed by the American architect Richard Meier, and the renewal of the Vaillantlaan, the backbone of the Schilderswijk. In 1987 Duivesteijn received the H.P. Berlage-prize for his initiatives to achieve more (architectural) quality in urban renewal areas.

After four years as (first) director of the Dutch Institute for Architecture in Rotterdam, Duivesteijn was elected as Member of Parliament in 1994. He became chairman of the Parliamentary Inquiry Committee of Grand Infrastructure Projects and member of the Parliamentary Inquiry Committee of Building Industry. From 1998 to 2006 he was a member of the Council of Europe and the Western European Union Assembly. As a Member of Parliament Duivesteijn developed several bills, some of which have been converted into legislation.

ln 2006 Duivesteijn was asked to become alderman of Almere, in order to guide the growth of the city – one of the biggest challenges in Dutch spatial planning. Because the local government owns most of the land, Almere also offered Duivesteijn the opportunity to break with a long tradition of supply-driven (and money-driven) housing. In 2006 he introduced ‘I build my house in Almere’, a program focused on DIY-housing. In 2008 a special financial arrangement was added, which makes it possible for people with a maximum annual income of €36,000 to build their ownhouse. With this, he brought his ideas about empowerment and self-organization into practice on an unprecedented scale in The Netherlands.

On a higher level, demand-driven urban development became the main principle in the future plans for Almere, which he created in collaboration with the Dutch architect Winy Maas (MVRDV). In particular Almere Oosterwold, a large area in the east of Almere, will grow bottom-up, almost organically, based on the needs of the people that will live and work there.

In 2008 Duivesteijn received the Rotterdam-Maaskant-prize for his entire oeuvre. The jury stated the following: “Typical for Adri Duivesteijn are the long lines that he draws in Dutch housing history (…) The emancipation of people, for example, is one of the things he has always believed in. The jury regards his efforts to fight for self- determination as a logical continuation of all the activities he initiated in his youth, in order to get citizens involved in creating and re-creating the city.”

Since February 2013 untill july 2015 Duivesteijn was a Member of the Senate. He was the Labour- spokesman on physical planning and housing. One of the topics he put on both the political and public agenda is the transformation of large-scale housing corporations into a multitude of smaller cooperatives; a housing system that gives people a prominent role in the ownership and management of their own living environment. In 2015 his proposal for housing coöperation is becoming part of the law thats regulates the social housing system in the Netherlands.  It give lower income people the possibility to run their own non profit housing coöperation.

On may 13th, 2014 Duivesteijn received from the City Council of The Haque the Golden Medal and became honorary citizen of the City of The Hague: ‘It expresses the appreciation and acknowledgement for his involvement and commitment in the process of fysical planning and urban renewal during January, 24th 1975 until July 20th 1989: “It brought a lasting contribution on the positive experience of the City of The Haque”.

Adri Duivesteijn was born on August 27th, 1950. He has a partner and four children and lives in The Hague.